For more than 27 years, a Florida based boat manufacturer has built versatile, distinctive boats designed for both the serious sport fisherman and the dedicated recreational boater. The company’s boats are widely considered among the best on the water. Each is carefully built one at a time, and all hulls and parts are either hand-laminated or feature mechanically applied fiberglass roll stock and resin.

The company’s boats are manufactured in a 60,000 square foot plant, staffed by approximately 130 employees. The plant is in full operation 10 hours a day, five days a week. All told, this adds up to a consistently heavy production schedule. It also added up to a lot of dust, which became evident when the general manager noticed a decline in overall air quality within the plant.

“There seemed to be a lot of dust floating in the air and settling on equipment,” he said. “It was clear that we needed to do something. We feared that the dust problem was compromising our pledge to maintain a safe, comfortable work zone for our employees.”

To check the plant’s air quality, the company enlisted the State of Florida to perform an air quality test. When the test confirmed that they had a significant dust problem, the general manager began looking for ways to bring the plant into compliance with OSHA standards.

A Dusty Business: The Manufacturing Process

The plant is divided into two sections: part production and boat assembly. Both processes generate nuisance dust that was left to float around the plant and contribute to the dust problem.

During part production, large amounts of debris are created – especially during the lamination process. This involves laying out fiberglass to create a boat shell, pulling out the mold, and trimming and grinding the parts to finish the basic shell. It’s in the trimming and grinding processes that the bulk of the dust is generated.

Previously, management provided respirators for the safety of each worker. But since the dust being generated during the trimming and grinding process was never collected, it was circulating in the air, threatening employee safety throughout the plant.

The other stage of production is the actual assembly of the boat. This involves drilling and fastening the parts for each boat, which leaves debris in the boat hulls. The company previously blew this debris out of the hull with an air hose. Although this process eliminated dust from the boat hulls, it circulated it around the plant.

Cleaning Up With Industrial Vacuums

After seeing an ad for Nilfisk CFM’s (Malvern, PA) industrial vacuum cleaners, the plant manager contacted the company to find out what its vacuums could do for them. Nilfisk’s Senior District Manager, Rick Stegbauer, performed a thorough analysis of the plant and its processes. Together, they devised a cost-effective cleaning system designed to dramatically improve the plant’s overall air quality. The core of the program was the integration of vacuum cleaners directly into production processes.

As part of the program, the company integrated the Nilfisk GM 811 vacuum into its cutting saws. These tools do the trimming and grinding during part production. With the Nilfisk vacuum, workers were now able to pull dust and debris away from the cut as it is made, collecting and retaining it within the vacuum for safe disposal.

During assembly, the Nilfisk GM 811 captures the debris at the bottom of each boat hull, replacing the less effective air hose method. The new vacuum method prevents dust from being circulated into the air and ensures a safer working environment.

To complement the two production applications and keep other areas of the plant clean, the company also uses the Nilfisk GM 83, the predecessor to the Nilfisk CFM S3 for general plant maintenance and cleaning. The ergonomic three-motor vacuum enables workers to easily reach overhead pipes as well as clean the plant’s walls, air filters, floors, machines, and aisles. When its not being used for maintenance it is used in production with up to three power tools attached.

Plant Managers are astounded by the overall improvement in their plant.

“During the past year, we’ve seen a major drop in the amount of dust in our plant. In fact, we’ve realized a 94.4 percent improvement in air quality. Now, we don’t have to worry as much about the safety of our employees or OSHA compliance because we know that the dust we generate during production is being securely retained in the vacuums.” 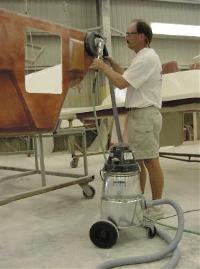